My introduction to Sacral Neuromodulation therapy: 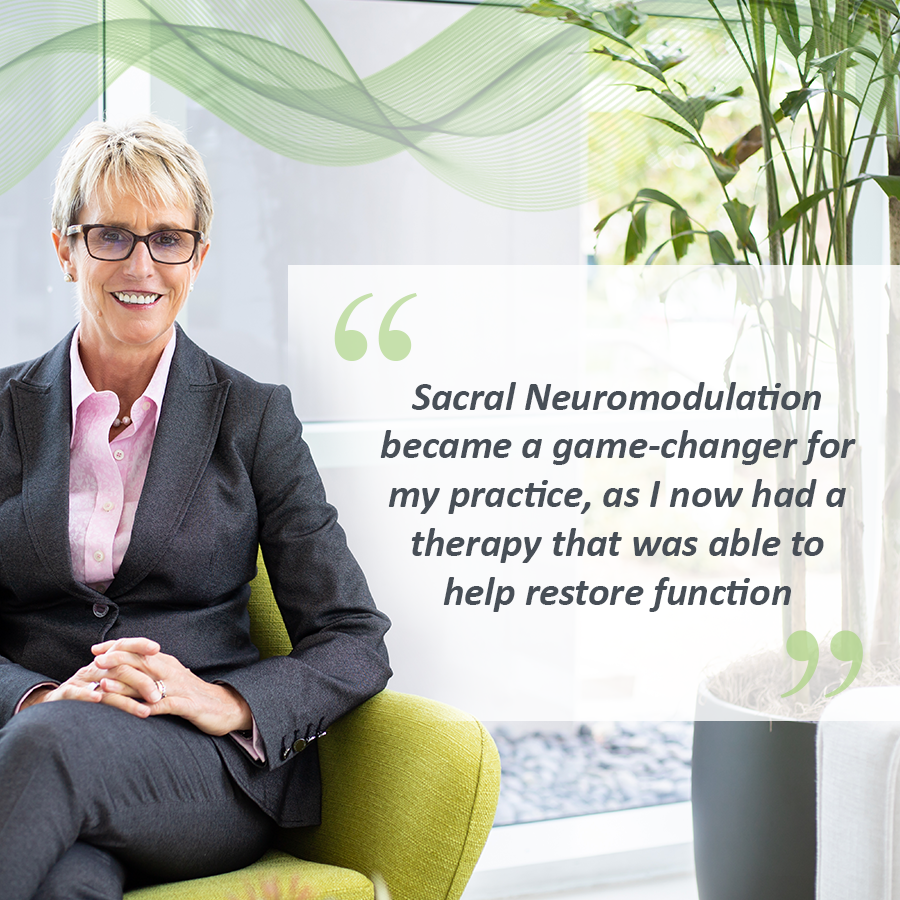 I was introduced to Sacral Neuromodulation (SNM) to treat overactive bladder (urinary urge frequency, urinary urge incontinence) and bowel dysfunction, shortly after it was approved by the U.S. FDA, and performed my first cases in 1999.

My mentor, the late Dr. J. Thomas Benson, was a pioneer in this field and passionate about the potential for this therapy. The initial technique to place the device was much more invasive and was foreign territory for a female pelvic medicine physician.

After I implanted my first few patients it was obvious why Dr. Benson was so passionate and so adamant that I get this therapy started in California. Back then there was very little to offer patients whose symptoms were not resolved by behavioral changes and/or medications. Sacral Neuromodulation became a game-changer for my practice, as I had a therapy that was able to help restore function. The patients were even able to trial the therapy to see if it worked! As a surgeon, there was no other surgical intervention that I could test ahead of time to reassure my patients this was the right therapy for them. My patients returned to the office happy with their outcomes and felt they got their life back.

Given I was one of the first physicians to offer SNM in California, I soon became a referral center and an advisor to the device manufacturer. SNM soon became my primary area of clinical practice and research. During my time consulting, the therapy underwent very few advances. The most notable advance was a physician-driven invention of a lead with anchors in 2002 which allowed the procedure to become minimally invasive. The only other significant change came in 2006 with the introduction of the smaller non-rechargeable neurostimulator.

At that time other neurostimulation therapies, such as Spinal Cord Stimulation, were making substantial advancements such as having a long-lived rechargeable, full-body MRI compatible device. Many physicians, including myself, became frustrated at the lack of innovation in the SNM space. Despite the shortcomings of the available therapy, I remained passionate about SNM therapy because I had seen the significant impact it had in improving the quality of life of my patients.

Partnering with Axonics to improve Sacral Neuromodulation:
In 2014 I was approached to become an advisor for Axonics Modulation Technologies, Inc. Axonics was seeking to develop a product to enter into the SNM market. I was extremely impressed with the medical device experience of the management team, and even more so by their approach to product development. Instead of coming to me with a prototype device that had been developed by a bunch of engineers who were unaware of the gaps that existed in the therapy, they took an alternative approach. Axonics conducted both physician and patient-focus groups to inform the design of the product based on the voice the customer.

As I continued to consult with Axonics, I had the opportunity to be part of the product development which delivered everything physicians and patients had asked for and more! A smaller neurostimulator that was the size of USB stick, that was rechargeable and qualified for a minimum of 15 years life in the body, along with full-body MRI compatibility and intuitive patient-facing tools.

“A small rechargeable neurostimulator designed to last a minimum of 15 years in the body, along with full-body MRI compatibility and intuitive patient facing tools.”

I also had the opportunity to work with the regulatory and clinical teams at Axonics as we gained FDA clearance to conduct a pivotal clinical study that eventually led to FDA approval of the Axonics system for both urinary and bowel conditions. As I worked with these teams, I became aware that quality is a “religion” at Axonics and the most rigorous testing was performed when validating the product. I had consulted with many companies in the past, but never one with such dedication to quality nor one who conducted themselves with such purposeful and thoughtful innovation. I was happy that the therapy I was so passionate about was being “recharged” and that Axonics recognized how underserved the market was.

As I did some soul-searching and was honest about my passions, it became obvious to me that joining Axonics was the perfect next step in my professional journey. Since joining the Company, I have never looked back. I am thrilled to be working with such an intelligent, dedicated and talented team of people passionately focused on improving the quality of life of patients with urinary and bowel dysfunction.

Seeing the results, we have achieved in our clinical studies, and how satisfied patients are with their outcomes has further confirmed that I made the right choice. I look forward to reaching even more patients as we begin our commercial efforts in the US.